He smiles at mom. He coos and cries. He kicks his feet. He rolls around. He grabs for anything he can reach—then quickly puts it in his mouth.

In many ways, little Brantley Strunk is a typical, utterly-adorable, nine-month-old boy.

Brantley, though, is a special case. The first nine months of his life have included strokes, seizures, cardiac arrest, respiratory arrest and a heart transplant—that’s just the Cliffs Notes.

“It has been quite overwhelming at moments,” said Becky Lamson, Brantley’s grandmother, who helps closely with his care.

But today, Brantley is getting better. 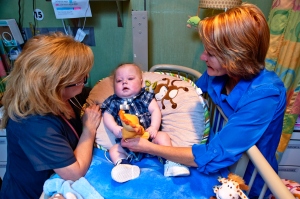 Brantley Strunk is cared for by Respiratory Therapist Amie Keck, left, with help from his grandmother, Becky Lamson, right.

In January, he was discharged from the children’s hospital where he had spent much of his life.

Not quite ready to go home, Brantley needed a place where he could get stronger while his family learned more about caring for him.

Luckily, the perfect hospital for this situation is right here in Missouri—Ranken Jordan Pediatric Bridge Hospital.

“There’s no one that does what we do,” said Laureen Tanner, president and CEO of Ranken Jordan. “We think we’re one of one.”

It’s a tiny niche market, amounting to less than 1 percent of all pediatric care. But Ranken Jordan owns this market for the Midwest and beyond.

Today, demand for their services is growing faster than ever. There is an ever-present waiting list. The staff is expanding rapidly. New construction plans are on the table.

For the Ranken Jordan team, growing business is a reminder of their mission and their important role in the health care industry.

And for children like Brantley—the sickest kids who have spent months in the hospital—Ranken Jordan is a blessing, it’s their bridge to home.

In the early 1940s, she wanted to help local children who were suffering from the debilitating illnesses of the day—polio, osteomyelitis and bone tuberculosis.

So she and husband Clay Jordan built a home in the St. Louis suburbs, hired a small staff and began caring for these children. They continued doing this for the rest of their lives.

Even after they passed away, the need for the service remained. In the 1960s, the house was expanded to make room for more children and staff. It was called the Ranken Jordan Home for Convalescent Crippled Children. This arrangement lasted for decades.

Then, in the early 2000s, Ranken Jordan went through an evolution. For the first time, it became a licensed children’s hospital. Shortly thereafter, Ranken Jordan moved out of the old suburban home to a new, beautiful 34-bed facility.

Earlier this year, the facility added a new descriptor to its name, becoming Ranken Jordan Pediatric Bridge Hospital. The word “Bridge” was carefully chosen, reflecting their longstanding mission of transitioning children from hospitals to their homes.

“What Mrs. Jordan sought out to do, we are still doing,” said Tanner.

Now, however, it’s on a much larger scale. Today, Ranken Jordan has 350 employees, up dramatically from the 82 staff members of just a decade ago.

These caregivers serve approximately 700 patients a year on a $26 million annual budget—with revenue coming largely from Medicaid and supported by fundraising as well as an endowment left by Mary Ranken Jordan.

The hospital operates independently and is proud of its ability to work alongside all hospitals and health systems.

“We’re like Switzerland, we work well with everybody,” Tanner said. “We’re not competitors, we’re collaborators.”

The growth at Ranken Jordan follows an increasing need for specialized bridge care. In Missouri alone, the need for this care is up 28 percent over the last three years, Tanner said.

This strong demand is driven by advances in pediatric medicine which are helping save more children than ever before. These children, then, need help from Ranken Jordan as they transition to lives outside the hospital.

“We have kids that walk out of here every week that were told they didn’t have a chance,” Tanner said. “We are saving kids that we’ve never been able to save.”

This is a national trend, according to Amy Knight, chief operating officer of the Washington D.C.-based Children’s Hospital Association.

“There are many, many kids alive today who we wouldn’t have been able to save 15 years ago,” Knight said.

Even with the increasing demand, Ranken Jordan still serves just a sliver of the pediatric market. Their target population amounts to just .4 percent of all pediatric patients.

But while few in number, these patients incur roughly 30 percent of the costs in the entire pediatric health system. These children have often had multiple surgeries and have spent extended periods in intensive care units. Their health frequently requires expensive medication.

With their medical needs, these young patients can create financial strain for hospitals. Ranken Jordan helps relieve this strain by providing a place for these children to go when they no longer need acute care, but are not quite ready to return home.

“Those are very expensive beds to maintain,” Knight said. “So having a Ranken Jordan provides an option for them to move children to a care setting that is more appropriate.”

As they serve this population of young patients, Ranken Jordan’s leaders know they too must closely monitor expenses. To control costs, the Ranken Jordan outsources many services that most hospitals choose to have on site. It doesn’t offer an emergency department or operating rooms. There are no radiology services at their facility and all laboratory work is done by vendors.

“Why duplicate services that are available elsewhere the community?” Tanner said. “We have worked really hard on cost containment, keeping our costs as low as possible. Our goal is to get kids back to their homes. That is by far the best and cheapest place for them.”

For families with sick children, the journey home is often a struggle. Brantley Strunk’s family knows this very well.

Brantley’s family first learned there was a problem during a routine ultrasound months before his birth. The sonographer performing the ultrasound noticed his heart only had three chambers — his right lower ventricle was not developed. 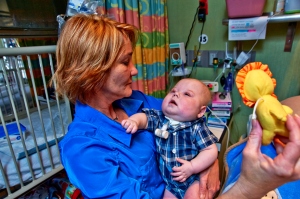 The family lives in Mountain Grove, in south central Missouri. Because local clinicians didn’t have the expertise to handle Brantley’s case, his mom was sent to St. Louis, where she was cared for by obstetricians who specialize in high risk deliveries.

With his condition, Brantley’s heart could not properly circulate oxygen through his body. Early on, his family learned he would need a new heart to have a chance at surviving.

To bide time, his doctors hooked Brantley to an ECMO device. The ECMO machinery essentially took the place of Brantley’s lungs and heart, keeping him alive as he waited for a donor.

Finally, the family’s prayers were answered in August. A heart was available. Brantley had his transplant surgery on Aug. 11.

“We will always remember the heart date,” said Lamson, his grandmother. “It was kind of like a new birthday.”

With his new heart, pediatric caregivers spent the next few months weaning him off the ventilator he had used to breathe. He then had a tracheal tube installed in his windpipe. He slowly got stronger.

“He was getting better, getting stronger and his new heart was doing great,” Lamson said.

By December, everyone was planning for Brantley’s homecoming. It was an exciting time. He would be Mountain Grove in time for his first Christmas.

But his trip home was abbreviated and nearly disastrous. Just six days after arriving, Brantley suddenly slipped into a seizure or perhaps had a stroke. He stopped breathing. He was without oxygen for eight minutes as his family struggled to get help.

Local caregivers arranged for Brantley to travel back to the St. Louis for evaluation. His first Christmas would be in the hospital after all.

Back in St. Louis, with Brantley recovering, his family began planning their next steps. They realized they couldn’t take him back to their rural home until they were prepared to handle any situation that might arise. They needed to master his care.

That’s when Ranken Jordan entered the conversation. Instead of going immediately home, Brantley’s hospital could release him to Ranken Jordan, where he could stay while he became stronger and his family learned more about how to care for his special needs.

“It’s a great facility,” Lamson said. “The nursing staff is great, the medical staff is great. They all stay in complete communication with his primary caregivers. They all operate together as one team.”

Now, with Brantley continuing to recover, the family is beginning to plan a second homecoming.

“We are looking at April if we get him stronger,” Lamson said. “Truly, we would love to have him home for his first birthday in May.”

Brantley’s family has hope for the future. They see him growing and developing. Therapy is making him stronger. His smile is worth everything.

Helping families find hope is what makes working at Ranken Jordan so rewarding. 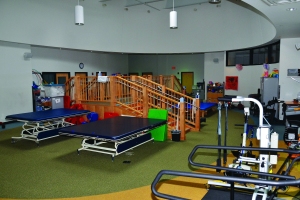 “It means so much to have a family realize there is still hope and joy even though their lives have changed completely,” Tanner said. “A lot of our parents say that they have felt hope for the first time when they’ve come here.”

Yet, there is so much more to do. During an interview with Tanner in mid-February, she said there were 25 children on Ranken Jordan’s waiting list. There just isn’t enough room.

To help fix this problem, Tanner is currently fundraising toward a major expansion. Ranken Jordan has $9 million raised toward a $32 million project to nearly double size of the facility.

They hope to break ground next spring and open the expansion in two years.

“We need those beds,” Tanner said. “If we had them today, we could fill them.”

Tanner also has a broader vision for Ranken Jordan. Someday, with the right opportunity, Ranken Jordan may take its successful model and apply it in other markets.

While this is still far from becoming reality, it’s an exciting prospect for the future — that a home in a Missouri suburb could transform into a bridge for children everywhere.

“We have developed a unique model,” she said. “I think we would like to influence this level of care around the country.”