The Magic of Marceline

Posted on August 21, 2014 by Jacob Luecke Leave a comment 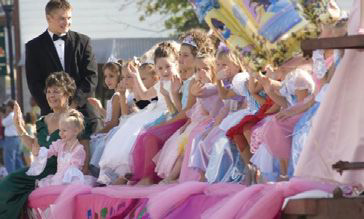 You don’t need to travel to Disneyland for a taste of Disney. You’ll just have to make the drive up to the North Missouri town of Marceline—located at the edge of sparsely populated Linn County.

In 1906, Elias Disney moved his family from Chicago to Marceline. Elias’s youngest son, Walt, spent his formative years there, drawing, painting, and dreaming. In 1911, his family moved to Kansas City, and 17 years later Walt animated a short called “Steamboat Willy” and introduced the world to Mickey Mouse.

Today, the people of Marceline proudly sport their Disney heritage.

Throughout town, there are a number of attractions. The Disney Farm, where Walt grew up, is private property, but you can still visit many attractions on the property. There, a large cottonwood tree, called the Dreaming Tree, is where Walt and his sister Ruth played as children. You can also see Walt’s Barn, where he put on his first show, dressing up barn animals in costumes. Since 2002, the farm has been home to the Disney Farm Arboretum. Walt was actually present when a few places were dedicated in his honor.

In 1956, the year Disneyland opened, Walt and his brother Roy came back to Marceline when the city named its public pool at City Hall after Walt. He returned four years later to open Walt Disney Elementary School.

However, Walt wasn’t around to see everything that was devoted to his legacy. Shortly after he died in 1966, the residents of Marceline rallied the US Postal Service to issue a stamp to honor Walt. The stamp was officially issued from Marceline on October 16, 1968. And later, in 2003, the town’s post office was renamed the Walt Disney United States Post Office Building.

One of the biggest attractions is the Walt Disney Hometown Museum, which opened in a renovated Santa Fe Railroad station in 2001—100 years after Walt’s birth. Today, the museum features exhibits with personal letters from the Disneys, family belongings, artifacts, and the only ride to leave Disneyland, a car from the Autopia ride. More than 10,000 visitors make a trip to the museum each year.

“It’s quite nice when you have a person with the name recognition of Walt Disney who stated throughout his lifetime that more important things happened to him in Marceline than happened in the rest of life,” says Kaye Malins, director of the Walt Disney Hometown Museum. “In fact, his daughter Diane told me that until she was an adult, she thought her father had spent his entire childhood in Marceline because that’s all he ever talked about.”

For Disney fanatics, the best time to visit is the third weekend of September during Toonfest—a two-day festival that brings in some of the country’s best cartoonists. The first day is open only to high school students, which lets those interested in art have an intimate experience with award-winning professional illustrators. The second day is open to everyone, and it’s an all-day family event with a parade, barnyard Olympics, crafts, a sketching contest, presentations from the cartoonists, and more.

“The Toonfest celebration we have literally draws people from all over the United States,” Malins says.

However, Marceline runs on more than just the magic of Disney.

Small by national standards, the town of 2,233 people is one of the largest in Linn County, which is home to just over 12,000 people. According to the Bureau of Labor Statistics, the county’s total work force is 3,945 people, and Marceline’s workforce makes up almost a quarter of that with 924 people, according to the US Census Bureau.

Walsworth Publishing Company is the town’s largest employer. In 1937, Don Walsworth founded the company in Marceline. Today, it’s one of the 50 largest printing companies in the United States and is among the top ten book printers in the country. The company, which has facilities in Kansas, Michigan, and throughout Missouri, employs more than 1,000 people in Linn County.

With over 65 full-time employees, Moore Fans is another one of the town’s top employers. The company specializes in manufacturing industrial fans for heating, cooling, and other air flow systems. The company has been a strong part of Marceline’s economy since it was founded in 1940.

For the residents of Marceline, though, the town is more than just a place to work and to visit Disney tourist attractions.

Yocom admits that the town doesn’t have the amenities an urban area can provide, such as a hospital or a Starbucks, but he points out that Marceline has a lot to offer for a community its size. The school district is rated AAA by Standard & Poor’s. Two years ago, the Marceline Family Health Center received a $2.6 million grant that was used for renovation and expansion; it now offers dental services.

The downtown district—the original inspiration for Disneyland’s Main Steet USA—is also seeing a renaissance. Earlier this year, Marceline received a $23,500 grant from Missouri Main Street Connection Inc., a nonprofit dedicated to revitalizing downtown areas in Missouri. So far, the grant has been used to encourage and help business owners.

For more than 50 years, Marceline’s annual Peanut Night, which takes place the Saturday following Thanksgiving, kicks off the holiday season. During that night, the town’s Christmas lights are lit, Santa visits, and the Marceline Chamber of Commerce sells bags of peanuts for a dollar apiece. Each of the 2,000 bags of peanuts has a prize, so they all sell out quickly— usually within an hour.

“It’s about a break-even situation for the Chamber, but it does bring in a lot of people from the surrounding areas,” Yocom says.

That’s just the type town Marceline is: a place where breaking even is a good thing as long as everyone has fun. It’s no wonder that Walt Disney brought so much joy to people for generations.