Boehringer Ingelheim Vetmedica–Pushing employees to be the best

Posted on October 17, 2014 by Jacob Luecke Leave a comment

For many years, Dr. Kevin Christiansen was a veterinary cardiologist in Kansas City, but he found himself increasingly frustrated with his work.

He met the marketing staff from Boehringer Ingelheim Vetmedica, who made the company seem appealing. And later at industry conferences, he heard more and more good things about the company.

So in March 2012, when he heard about an open position as a senior scientist in pharmaceutical research and development, he took the risk and altered his career path. He didn’t want to move his family from Kansas City, so now he commutes 70 miles each way to Boehringer Ingelheim Vetmedica in St. Joseph. But Christiansen doesn’t regret a mile of it. He now helps develop drugs for the veterinary industry. And he loves being able to create and innovate. 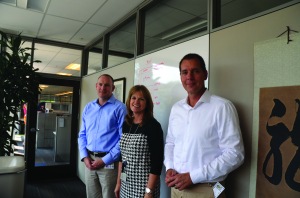 “I’m connected to all these extremely smart people,” Christensen says.

For Darcy Roberts, who now works in the company’s finance department, changing jobs didn’t mean leaving. She has held five different jobs in her eight years at BIVI, as the vaccine manufacturer is often dubbed. The initials stand for Boehringer Ingelheim Vetmedica Inc., which is the US animal health division of Boehringer Ingelheim Corp. GmbH–a family-owned pharmaceutical company founded in 1885 in Germany. BIVI manufactures vaccines and pharmaceuticals for the cattle, swine, equine, and pet industries.

Although BIVI is now owned by a German corporation, the company’s roots stretch back to 1916 when is was under the name Anchor Serum and it produced the first hog cholera vaccine. Today, approximately 900 people work on the newly expanded St. Joseph campus. The $150 million building spree was just completed and includes an expansion to its state-of-the-art biological manufacturing facility and research and development complex. BIVI also built new centralized warehousing facilities that enable safe shipping of fragile vaccines.

In 2013, the company celebrated a milestone when it produced more than 1 billion doses of product in one year in Missouri, helping make BIVI the No. 2 animal vaccine producer in the United States.

The company’s slogan is “Value through Innovation,” and it’s clear that workers are encouraged to take leaps to move the company forward.

“We have a hands-off leadership style,” says CEO Dr. Albrecht Kissel. “We expect you to make a decision. It might be wrong or it might be right.”

Kissel and his executive team reiterate that innovation isn’t driven through micro-management but by allowing employees to make mistakes and rewarding success on all levels.

Mike Vanek, who has worked in vaccine production for 18 years, enjoys the grassroots approach of the company’s Business Process Excellence program.

“We get credit and recognition, as well as gift cards and other incentives,” he says. Workers strive for “quick wins” that come from “A-HA” moments.

The Business Process Excellence program is just one of the many initiatives that Boehringer Ingelheim Vetmedica has in place to continually improve its work environment. The company also encourages workers to return to the college classroom through a program that fully reimburses tuition. BIVI also partnered with Northwest Missouri State University to create a specialized masterís degree program to provide employees with high-level training, including management, statistics, biology, and chemistry skills.

BIVI also recognizes that employees may not want to be pigeonholed into the same jobs, so the company allows and encourages employees to make transitions and evolve. Corey Halderman began his career four years ago as an engineer but has shifted into a sales and marketing job.

“Through a personal network connection, I set up a job shadow in marketing,” he says. Halderman liked marketing and made the switch. “The company was willing to take a high risk with me.”

Taking a risk on employees is what makes Boehringer Ingelheim Vetmedica an ideal place to work, though the company might not see it as taking a risk. BIVI instills the skills and work ethic needed for continued success. Hillary Liddick, a 10-year employee who works on the production floor blending and mixing antigens, agrees that working for BIVI means continually improving the work environment.

“No matter what job you have, you have the opportunity to make things better,” she says.