Posted on October 17, 2014 by Jacob Luecke Leave a comment

When workers talk about where they’d like to work, trust is high on the list. So is training. When companies grow at breakneck speed, both of those factors can take a back seat to simply keeping up with new business.

That’s why Veterans United Home Loans, a mortgage processing company based in Columbia, goes the extra mile to maintain both.

After the mortgage crisis bottomed out and home loan rates flattened, millions rushed to buy or refinance homes. As demand ramped up in 2009, Veterans United was poised to scoop up a large share of that business. With a winning combination of a easy-to-use online mortgage application process and high-touch personal mortgage counselors who stay with the client all through the process, Veterans United grew from 200 employees in 2009 to about 1,400 in 2014. 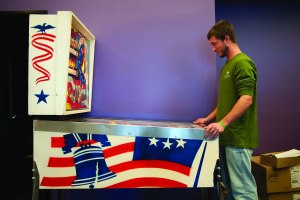 Veterans United grabbed office space where it could find it, and now the 1,000 employees at its Columbia headquarters stretch across 10 buildings, all referred to in military alphabet jargon: Alpha, Delta, and Echo.

Every office has the company’s values emblazoned on the walls:

Ian Franz’s role as culture coordinator is to make sure that Veterans United keeps employees happy and focused on the job.

“It’s taking care of people at every step,” he says.

Co-founders Brock and Brant Bukowsky infused Veterans United with the same workplace culture as many tech firms. A giant circular slide from one floor to the next invites playfulness, an on-site masseuse relieves strain from sitting at desks, and free healthy snacks keep employees’ stomachs from rumbling.

“We have parties all the time, but it’s strategic,” says Franz, who started as an account manager in 2008. “They get to know the people they work with.”

The employee bonding is apparent. Workers reach out to fellow workers going through tough times, like a young mother whose child was in intensive care. Groups gather after work to perform community service, like working at the Show-Me State Games and for The Food Bank for Central and Northeast Missouri. Many events center on the military community, such as raising money to build smart homes for wounded veterans and to take part in Operation Serve.

But the values also help Veterans United sustain itself through the difficult passages that accompany growth. A recent rollout of a new computer system, which came during the firmís busiest season, didnít go quite as planned and caused employee frustration and some long hours, but Franz said that the culture at Veterans enabled workers to “push through.”

The bonding and training begins at employee orientation. Part of the training is for employees to “see” their customers, even though the contact is online or on the phone. With a high volume of loan processing, it would be easy for employees to not comprehend that buying or refinancing a home is a major life event for hundreds of veterans and their families.

That’s why Veterans United trains and hires many veterans and trains non-veterans in military culture. There is a special outreach program to military spouses and a storytelling unit to bring a voice to the needs of military families through social media and other outlets.

At the end of orientation, employees are allowed to make their own T-shirts that emblazon their idea of workplace culture. Later, however, they might challenge a coworker to a friendly game of Lazer Tag at a local venue. 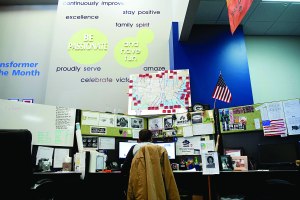 Employees are nudged to innovate and change processes they see as ineffective and are encouraged to communicate up and down the management chain. Training is a constant, whether during an informal lunch or a high-tech session. Loan officers and loan underwriters have to undergo an intensive certification process.

“It’s human nature to want to be productive, have autonomy, and have a great work environment,” says Amanda Andrade, the company’s chief people officer.

These qualities make Veterans United especially attractive to millennial workers, who prefer a supportive workplace with “set expectations,” she says, adding that at any one time, the company has about 40 college student interns.

Now that loan and refinance demand has leveled off, the company can slow the train down, Andrade says. That allows for a bit of reflection and a conversation with employees, such as “Is this the right job, and will you be successful in it?” The company then works to find the right fit.

Work and life balance is paramount at Veterans United. An employee blog offers tips and resources for dealing with stress or family crises. “Lunch and Learn” sessions explore non-workplace topics such as world religions, and legal help is offered to employee groups, like same-sex partners.

“We work really hard to create an environment to succeed at work,” Andrade says.