Enterprise Holdings was named the 2014 Champion of Enterprise by the Missouri Chamber of Commerce and Industry.

Enterprise Holdings is a Missouri-based company that has grown significantly since its founding in 1957.

The company’s rental fleet has doubled in the past 10 years. Annual revenue has surpassed $17 billion. It’s now the world’s largest rental car company, operating the Enterprise Rent-A-Car, Alamo Rent-A-Car, and National Car Rental brands from nearly 8,600 locations around the world. It’s also one of the largest privately held companies in the United States

But for company leaders, the most telling bottom line is something else — customer satisfaction.

In fact, many aspects of Enterprise are guided by how well the company is succeeding at leaving its customers feeling “completely satisfied.”

The company invests heavily in receiving accurate, up-to-date information detailing which of its locations are hitting the “completely satisfied” mark, and which are falling short. The data is backed up by tens of thousands of telephone surveys each month. As a result, the company’s brands consistently rank at the top of the J.D. Power Rental Car Satisfaction Study.

“Our business is built upon establishing long-term relationships with our customers,” says Ray Wagner, Vice President of Government Affairs. “We believe that if we leave people completely satisfied after each interaction they have with Enterprise, they will continue to choose us in the future.”

But beyond ensuring that the company’s lofty service goals are being met, the customer satisfaction data also drives decisions about employee promotions and development opportunities. When Enterprise finds a young leader who achieves consistent satisfaction results, the company steps on the accelerator for his or her career.

“It’s simple: customer satisfaction is the key to career growth at Enterprise,” says Wagner. “Using this model, we’ve constructed a leadership team that, on all levels, understands how important it is to have happy customers and — most importantly — knows what it takes to achieve that goal.”

Yet, none of this is new to Enterprise. In fact, founder Jack Taylor laid out his personal philosophy when he began the company: “Take care of your customers and your employees first, and the profits will follow.”

As a young man, Jack Taylor had his mind set on becoming a business leader. He enrolled in college in 1940. But when the United States entered World War II, Jack left school and joined the Navy. The war took him to the South Pacific where he served as a F6F Hellcat pilot. During this time, aircraft carriers were his home, including one carrier that would become the most decorated ship in the Navy’s fleet—the USS Enterprise. 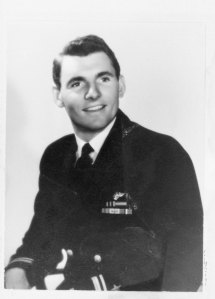 Back in St. Louis after the war, Jack focused again on business, starting a delivery service company. Later, he got a job selling cars at a local Cadillac dealership. After nearly a decade at the dealership, Jack offered his employer a business proposal—why not partner on a business focused on the relatively new area of automobile leasing?

His employer liked the idea and cut a deal with Jack, which included substantial risk for the young entrepreneur. He had to agree to invest $25,000 in the deal and cut his pay in half.

The company launched in 1957 with a fleet of seven vehicles. It was called Executive Leasing Company. Twelve years later, as the growing company expanded beyond St. Louis, Jack decided to change the name to Enterprise. The new name honored the USS Enterprise and a time in Jack’s life that taught him team spirit, hard work and integrity.

“At Enterprise, we are proud of our heritage and the fact that our founder and so many of our employees have served in the armed forces,” says Wagner. “We work hard each day to honor that sacrifice by hiring today’s veterans and supporting our employees who choose to serve in the National Guard or Reserve.”

With its new name, Enterprise continued to grow with a focus on renting cars from neighborhood locations, in contrast to competitors which rented primarily from airports — Enterprise didn’t open its first airport location until the mid-1990s.

Enterprise also set itself apart by pioneering the practice of picking up their customers, which led to the company’s famous “We’ll Pick You Up” slogan.

In 2007, the business expanded significantly when it acquired Alamo and National. During these decades of growth, Jack and his son Andy Taylor, who took leadership of the company in 1990, have opted to keep Enterprise private as a family business.

Yet, the Enterprise family continues to grow. Today, there are nearly 80,000 people working for this family business — including Pam Nicholson, who was promoted to CEO in 2013 and exemplifies Enterprise’s development of leaders from within.

The company touts that the program puts new leaders in position for career advancement, teaching them how to motivate staff, attain strong customer satisfaction and maximize profits—essentially giving them the tools of a successful entrepreneur.

With this training, Enterprise promises new hires that the sky is the limit for their career inside the company. If prospective employees have any doubts, they need only to look to the current CEO. 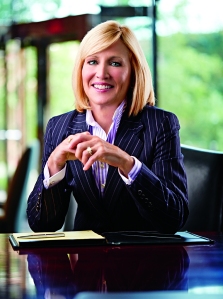 Pam Nicholson joined Enterprise Rent-A-Car in 1981 — fresh out of the University of Missouri. She participated in the company’s internal management training program and was quickly promoted.  She transferred from St. Louis to southern California, where she continued to rise through the ranks, helping to greatly grow Enterprise’s business in the region.

She later served in executive positions in St. Louis and New York — her career trajectory illustrating the company’s desire to promote based on results rather than longevity.

She made company history when she became the first woman and first non-member of the Taylor family to be named chief executive officer. Today, she regularly ranks among the most powerful women in the world.

“Pam’s path is a classic Enterprise story,” says Wagner. “Across the company, nearly all of our managers and executives began their careers in our training program. This is the promise that we share with all new employees. It benefits our organization as well. By opening the career ladder — including the very top jobs — to our current employees, Enterprise has created a staff of very motivated leaders and managers who know their good work is not being overlooked.” 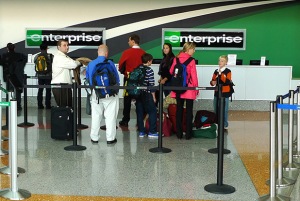 The company’s foundation has given more than $200 million to nonprofits engaged in community improvement and other projects. The vast majority of those funds—87 percent—fulfilled employee requests for donations to help their local regions.

“Enterprise is a family business, and our family extends to communities far and wide,” says Wagner. “Our employees understand their neighborhoods best, and Enterprise is grateful for their leadership and guidance as we seek to strengthen these communities that have helped our business grow and prosper.”

Many employees are also actively engaged in community organizations.

“In addition to charitable giving, Enterprise employees are active members of nonprofit organizations that improve our communities, industry associations to which our business customers belong, and business organizations such as the Missouri Chamber that enhance our ability to be successful,” Wagner says.