Posted on December 10, 2014 by Jacob Luecke Leave a comment

For 100 years, the skilled workers at Musselman & Hall Contractors LLC have been helping build Missouri. 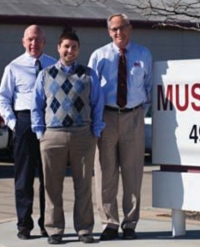 The company actually started as the George K. Musselman Construction Company back in the 1890s. It took on its current name in 1914 when Musselman and John Nicholas Hall formed a partnership.

Over the past century, Musselman & Hall Contractors have maintained a flexible company that is able to change with the times. During World War II, the company worked on defense installations in Kansas City and Independence. Once the war ended, the company looked for ways to expand to help employ the influx of veterans who were returning home. During this time, it expanded to begin doing street and railroad work.

Today, Musselman & Hall provides asphalt, concrete, and railroad construction and repair services to commercial, industrial, and governmental customers throughout the Midwest. The company employs more than 100 people during busy construction months. The main office is in Kansas City with a branch in Weldon Spring.