It’s Time to Upgrade Your Business Tablet — Is Apple Still the Clear Choice?

This April, the iPad turned 5. Already, it’s had quite a life.

When launched in 2010, the iPad defined the modern tablet form. It quickly became an unparalleled success for Apple, selling more units than even the iPhone did during its first five years.

If your company is like most, you’re likely using iPads in some aspect of your business. Some of these are probably the iPad 2, a popular but aging model.

Like all technology, there comes a time to upgrade. If your company is still hanging on to vintage tablets, that time is now.

In the wake of the iPad, several compelling competitors have come to market. In the first quarter of 2015, 63 percent of tablets shipped for sale weren’t iPads, according to the International Data Corporation research firm.

Considering this shift, should your company celebrate the iPad’s birthday by switching to a competing platform? Most businesses aren’t yet making that leap. Data from Good Technology, a mobile security provider that is viewed as an expert in the field of mobile technology, shows that iPads still make up roughly 90 percent of recent business tablet purchases.

It’s worth considering all the options as your business buys into the next generation of tablets.

iPad Air 2
The most recent version of the iPad makes it easy to see why this device remains the king of tablets for business. The iPad Air 2 is fast, has a great screen and weighs one pound. An upcoming software update will bring better multitasking features.

But software is its biggest selling point. The iPad App Store has the largest selection of apps out there, including the Microsoft Office suite—a business essential. In addition, Apple is working with IBM to develop exclusive iPad apps for businesses.

It is also worth considering whether you’ve already invested in iPad apps. If you go with a competitor, you’ll have to repurchase them, provided they are available on your new operating system. 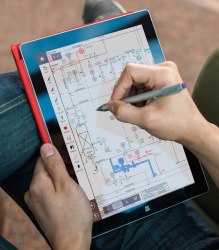 Surface Pro 3
There are several reasons why businesses might consider switching to the latest Surface model from Microsoft. It has a bigger screen than an iPad and it comes with a digital pen for jotting notes. Its built-in kickstand works great on an office desk.

But its biggest trump card—it runs Windows. For many Windows-dependent businesses, this means that the same software your employees use at their desks can likely be loaded onto the latest Surface tablet. Other tablets can’t match this feature.

The Android Option
Consumers have been quick to embrace the variety of tablets that run Google’s Android operating system.

Globally, Android tablets are selling far better than iPads and have been for some time.

The biggest draw for Android is variety. There are a plethora of solid Android tablets on the market. They come in different sizes and various storage choices. Some high-caliber Android tablets are cheaper than the most recent iPad or Surface. And Microsoft Office is available on Android, too.