Posted on November 24, 2015 by Jacob Luecke Leave a comment

Any attempt to describe the recent success at Cerner requires a thesaurus full of superlatives.

The company started the year by completing its major $1.3 billion acquisition of Siemens Health Services. In one day, the Kansas City company’s workforce grew by nearly 40 percent.

By mid-summer, Cerner’s massive new campus development began rising from the ground on what was once the site of an abandoned shopping mall. The 16-stage expansion has been called the biggest economic development project in state history by Governor Jay Nixon.

In October, Cerner held a giant health care conference at Kansas City’s Sprint Center, drawing tens of thousands of attendees from across the globe. 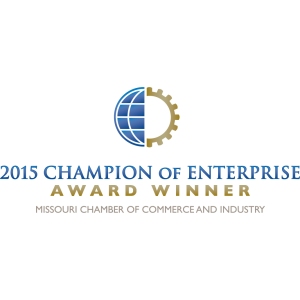 And that’s just the start. Nearly every number you can find to describe this home-grown tech giant is staggering.

In 2014, annual revenue topped $3.4 billion, nearly double what it was five years prior. Since the acquisition of-Siemens Health Services, the company’s annual research and development budget is more than $650 million.

The new campus expansion is estimated to cost nearly $4.5 billion. The extra space is needed because the company expects to add as many as 16,000 new Kansas City employees over the next decade.

Despite all of these huge figures, the company’s story really starts with a couple numbers you can count on one hand—three entrepreneurs gathered around one concrete park table.

Kansas City’s Loose Park was the site of a Civil War battle and is one of the most popular and historic parks in the city. The park is also historic for Cerner.

In 1979, Paul Gorup, Cliff Illig, and Neal Patterson sat around a table at the park and envisioned how computers and networking could revolutionize the practice of medicine. They wanted to develop a common platform that hospitals could use to securely share patient data, allowing health professionals from different organizations to coordinate care. They believed these changes would ultimately lead to better care for patients.

The trio founded their company that year. They created their electronic health record platform in the 1980s and continued to refine it during the 1990s—setting the foundation for incredible growth.

Cerner President Zane Burke says the entrepreneurial spirit that launched Cerner remains at the heart of the company.

“Even as Cerner has grown, the story of our origin continues to inspire us and inform how we think about our future,” says Burke. “For many businesses, the larger they grow, the harder it becomes to adapt and innovate. But at Cerner, we continue to have a corporate environment where a few people can gather around a table and create an idea that spawns an entirely new mission and direction.”

That passion for creating an entrepreneurial environment inside the company is working. Cerner is annually recognized by Forbes as one of the most innovative companies in the world.

The company is also regularly regarded as one of the best places to work, even in the highly competitive tech industry. Cerner works to foster an engaging work environment and offers a suite of benefits aimed at helping employees improve their personal health. In 2015, the company was also recognized for its efforts to recruit a diverse workforce. Fortune named Cerner the most admired company in health care.

All of this is great news for Cerner’s new employees. The company added quite a few of them in 2015.

Investing in the Future

Cerner made national headlines in 2014 when it announced its planned purchase of Siemens Health Services’ health technology business unit for $1.3 billion.

It was a bold strike that signaled Cerner had no intentions of slowing its pace of growth. The acquisition, finalized in 2015, brought thousands of new employees into Cerner. Cerner is expected to draw $5 billion in revenue this year.

The immediate benefits of the purchase include Cerner instantly extending its reach to thousands more health care provider facilities—an important goal for a company working to establish a common standard for medical information sharing.

But in the long term, the acquisition may net even greater benefits, as the combined operations allow Cerner to invest more in research and development and as the company profits from the talents of its expanded workforce.

“By combining client bases, investments in R-and-D and associates, we are in a great position to lead clients through one of the most dynamic eras in health care,” says Neal Patterson, Cerner chairman, CEO, and co-founder. “Cerner remains focused on key development areas including population health, physician experience, open platforms, revenue cycle, interoperability, and mobility. We see these as critical areas of investment to ensure providers can meet growing regulatory demands and control costs, while continuing to improve quality of care.”

One of the biggest investors in Cerner’s vision for the future is the federal government.

This summer, a team including Cerner, Leidos, and Accenture won a $4.5 billion Department of Defense contract to modernize the health records system used across the entire military health system. It’s the largest health IT contract ever awarded, with Cerner’s team beating out two competitors for the work.

The military is looking to the new technology as a way to save money, save time, and most importantly, save lives,  says Christopher A. Miller, the Defense Healthcare Management Systems program executive.

When fully implemented, the contract will mean Cerner’s technology will be used to help serve 9.5 million people who receive care through the Defense Department.

The government’s intensive review of competing medical records technologies and its ultimate selection of Cerner will likely serve as an important endorsement of Cerner’s solutions. It could even influence other health providers around the world who face a similar choice as they upgrade their own records systems.

With the acquisition of Siemens Health Services and the new Department of Defense contract, there will be many new faces to Cerner. The company anticipates a large expansion of its Kansas City workforce over the next 10 years.

If current estimates are right, the company’s staff could grow by 75 percent. Where will all these people work?

An aerial rendering of the new Cerner campus in Kansas City.

Cerner answered that question in 2014 when it began construction on its new campus at the demolished Bannister Mall in south Kansas City.

Cerner plans to build the new campus in 16 phases over the next decade, adding 4.7 million square feet of space. This includes plenty of room for new retail development. Community leaders hope the project will spur growth throughout the city, bringing in additional companies and jobs throughout the region as businesses establish Kansas City locations to help them closely collaborate with Cerner.

With the massive changes happening around Kansas City, it can be easy to overlook the place where Cerner’s work matters most—at the bedside.

In 2013, Susan Atteberry was recovering from double knee replacement surgery at North Kansas City Hospital when she began experiencing a dangerous set of symptoms, including a high fever and hallucinations.

“There were certain things she could see in the room that we knew weren’t there,” says Susan’s daughter, Christine Atteberry-Pully.

Fortunately, Susan was being monitored by a Cerner system that included a screening tool for sepsis—a potentially deadly blood infection. The Cerner technology automatically detected the changes in Susan’s vitals and alerted the nurse of her condition.

“That alerting system doesn’t treat that patient, but it gets me to that room to put my eyes onto that patient to say something’s not right and to escalate it to the next level,” says Julie Filbeck a nurse at North Kansas City Hospital.

To help speed the advance of new technology to the bedside, Cerner recently announced a new partnership with Truman Medical Centers to pilot new advances and innovations.

The new partnership means Missouri patients will be the first in the world to benefit from new, cutting-edge technologies being developed by Cerner.

Truman Medical Centers President and CEO Charlie Shields says he is excited about how this program enhances the care for all patients..

“Ultimately, we have the potential to impact care around the world, as we learn and progress together in Kansas City and then share our expertise with other Cerner clients, health care organizations, and communities,” says Shields.