Republic Services: Trash is our business

The blue roll carts on Miguel Jimenez’s route are filled to the brim. It’s the second garbage collection day after Christmas.

Many residents in this Jefferson City neighborhood are clearing out packaging, wrapping paper, and cardboard boxes. Jimenez picks up 3.5 tons of recycling during his first run through this neighborhood—a nice haul.

Now, he’s back for the trash. At one home, an artificial tree protrudes from the top of the waste cart.

Overflow loads during the holidays can challenge garbage crews. But it’s no big deal for Jimenez, a 22-year veteran of this industry. At each house, he uses a joystick and a video monitor to guide a robotic claw as it clasps the roll cart, hoists it into the air, and empties it into his truck.

Miguel Jimenez collects trash on his route in Jefferson City.

It’s not an easy skill to master.

“It takes quite a while,” Jimenez says.

This technology is a major investment by Jimenez’s employer, Republic Services. But the payoffs are huge. By the end of his shift, Jimenez will have emptied more than 1,000 bins. Not long ago, that kind of productivity was unheard of in this industry.

The robotic truck also means fewer injuries and longer careers for waste collectors, who are trained to act as the public face of the company.

As Jimenez collects trash, he fetches roll carts for older customers. If someone forgets to bring a bin to the curb, he climbs down from his truck and gets it. He knows the houses where kids run to the window to see his big blue truck. He waves to them. In return, he is embraced by the community.

“On my Friday route, one guy always puts an orange juice on top of the cart for me,” he says. “He’s been doing that for the past seven years.”

It’s all a sign that the trash industry—often seen as dirty, smelly, and not-particularly-friendly—has evolved far faster than its public perception.

Not Seen, Heard, or Smelled

At the end of Jimenez’s route, he hauls the waste to Republic’s 75-acre landfill just east of Jefferson City.

Here, Curt Robertson, the landfill’s operations manager, watches as a semi-truck unloads 25 tons of trash that just arrived from the Lake of the Ozarks.

On an average day, 500 tons of new trash arrive at the landfill. As the new trash is unloaded, a massive trash compactor works to evenly spread and compress the waste.

“You need to make four to six passes over the trash to get it packed down right,” Robertson says, watching the compactor driver work.

It’s important to get it right. The mindset is to treat the trash like a construction material.

On a macro level, the landfill is constructed out of dozens of individual waste cells. Each cell is independently contained with separate liners and water collection systems.

At this landfill, workers fill just one cell at a time. At the end of each day, they spread a layer of fresh soil over that day’s new trash. The alternating layers of trash and soil continue until the cell is full and a new one opens. This procedure keeps the landfill stable and odor free.

“We try to maintain it so that we’re not seen, heard, or smelled,” Robertson says. “If you can drive by and not even know we’re here, that’s a sign we’re doing a good job.”

However, this landfill also has another important job to do: producing fuel.

As trash decomposes, it releases methane gas. Republic has 90 gas wells at this landfill that capture the methane and feed it to a nearby power plant where it produces 3.1 megawatts of electricity.

Piping leads to a methane gas power plant near the Republic Services landfill in Jefferson City.

The energy is sold to the City of Columbia. The hot water and steam generated as a byproduct are used at the adjacent state prison.

As gas producers, landfill workers have to occasionally retune their methane system to account for different types of trash entering the landfill. In recent years, gas scrubbers were added to help achieve a greater purity of methane.

An uptick in local recycling has also changed gas output.

These gas production efforts will continue long after the landfill, which opened in the 1970s, closes 16 years from now.

After closure, the landfill will resemble a steep, grassy hill. People who work here like to envision that someday, this could be a lightly developed park. Maybe, there could be hiking and mountain bike trails.

But before that happens, environmental regulations will require Republic to look after the site for about 30 years. This is typically a dull period of monitoring and basic maintenance.

Republic Services, which is based in Phoenix, entered Missouri in 2008 as part of a $6 billion national acquisition of Allied Waste Industries.

Among the properties Republic acquired in the buyout were two adjacent landfills near Lambert-St. Louis International Airport.

At the time, the Bridgeton Landfill was nothing notable. It had been topped off four years earlier and was sitting quietly. It looked like a grassy hill.

Warning signs are posted on the gate around the West Lake Landfill.

The second landfill, West Lake, was a gated EPA superfund site. It earned this status due to a 1973 decision to mix 8,700 tons of leached barium sulfate into topsoil at the landfill. The barium sulfate was a residue from the uranium enrichment work done in St. Louis during the effort to create the first atomic bomb.

As Republic considered the aquisition, they reviewed the EPA’s West Lake plans and the state’s requirements for maintaining the closed Bridgeton Landfill. Nothing raised a major concern.

But two years after the purchase, everything changed. In December of 2010, contractors at the Bridgeton Landfill began noticing high levels of carbon monoxide in the landfill’s gas extraction wells. Soon, Republic discovered that some of the buried trash had begun to smolder underground—a vaguely understood phenomenon that has plagued a number of landfills nationwide.

Before long, news outlets were reporting about smoldering trash heading straight for radioactive waste. It quickly became a national story.

“Suddenly you had people saying that, in a matter, of months St. Louis was going to go boom,” says Russ Knocke, Republic’s vice president of communications and public affairs. “That’s not going to happen.”

In reality, the reaction was moving at about six inches per day and would need to travel 2,500 feet to reach the radioactive waste in the West Lake Landfill. But as concern spread, Republic worked on a response plan.

To cut down on rising odors caused by the smoldering, acres of high-tech liner were installed over landfill. In addition, the company dug dozens of new gas wells to capture smells before they reached the surface.

“There is a lot of science going on,” Knocke says.

Russ Knocke at the Bridgeton Landfill.

That includes 12 cooling units designed and built by Republic engineers. The units circulate frigid water through pipes buried deep inside the landfill. They were installed to stop the reaction in its tracks.

To date, the company has spent $180 million at Bridgeton. In coming decades, that cost will likely more than double. The EPA recently decided an underground barrier should be built to isolate the waste at West Lake Landfill from the reaction happening at Bridgeton.

Such a project has never been attempted before.

EPA has said implementing the plan will be “highly complex.” That means another huge bill for Republic, which is obligated to pay a third of the cost.

While the company never anticipated these problems, Knocke stressed that Republic leaders feel good about their efforts to address a disaster they own, but didn’t create.

“I’m optimistic that we will eventually get to a place where people will recognize that they were fortunate to have a company like Republic that had the keys to this thing when the problem started,” he says. “We refused to walk away and we spent the money to do what’s right.”

Even with the unforeseen expenses at the Bridgeton Landfill, Republic has continued to invest in other projects in the St. Louis region, including a recent $19 million recycling upgrade.

The crown jewel of this investment is the company’s state-of-the-art Northside Recycling Center.

The facility is capable of producing 25 tons of baled recycled material each hour—turning St. Louis toss-outs into viable raw materials that Republic can sell. 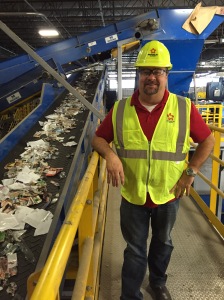 At the entrance to the center, trucks unload heaps of recyclable products. Paper, plastic, cardboard glass—everything is mingled together.

Batliner surveys the pile, which came from local homes. He remarks that the heap looks much different than it just did years ago.

“There are way more cardboard boxes now. Ten years ago, you didn’t have a box in there,” he says. “You didn’t have many boxes at home. Maybe a shoebox.”

In front of Batliner, a loader scoops up the recyclables and places them on a conveyor belt. Thus begins a high-speed ride through a complex mechanical system that sorts using gravity, magnets, and optical scanners.

This recycling facility has 120 workers across two shifts. However, the employees serve mostly as quality control. Nearly all of the sorting happens via machine.

At the end of the day, 92 percent of the material that shows up here is sold to be remade into new products. Office paper is shipped to Kentucky and Alabama where it becomes paper towels. Plastic bottles are sold to plants that make them into carpet and paint buckets. Cardboard boxes become more cardboard boxes. Newspaper is shipped to China and India to help fill their paper needs.

Republic is proud to show off this facility. Nearly 800 people came to tour it last year. It opens their eyes, Batliner says, and many people leave amazed by the technology—and with changed perceptions about what the waste industry really looks like.