Business professionals find joy in teaching as a second career

Posted on August 23, 2016 by Jacob Luecke Leave a comment

She left cold calls behind. Sales quotas, too, were now in the past. As Debra Stidham began her first day as a teacher, she felt ready to face a new challenge: a room full of third-graders.

“It was a little scary that first day, but you find your voice very quickly,” she said.

Over two years, Stidham had transitioned from being an advertising sales manager to an elementary school teacher.

The switch required her to take a significant pay cut and re-enroll in college to earn her certification to teach.

Yet she is far from alone in taking this path. Making a midcareer switch into teaching is more common than many people think.

The Missouri Department of Elementary and Secondary Education receives several calls each day from business professionals who are considering becoming teachers, said Margery Tanner, the state’s director of educator certification.

Professionals like Stidham who make the switch are often coveted by school districts, Tanner said.

“I think they are very successful when they do transition to teaching,” she said. “They bring a maturity to the classroom.”

However, becoming a teacher requires much more than sending in a résumé. One of the biggest hurdles is becoming certified to teach.

Tanner said one of the quickest routes to certification for professionals is to teach in the discipline of their college degrees.

“For example, if someone has a business degree and they wanted to teach business, there’s what is called a temporary-authorization route to certification,” Tanner said.

But teaching other types of classes may require returning to college. The American Board for Certification of Teacher Excellence is another option for those wanting to become second-career teachers. A person with a master’s degree or doctorate has more possible routes to teaching.

With so many options, Tanner said, the education department helps professionals identify the best path toward certification.

“That’s part of what our office does is help to consult and help people through that transition,” she said.

Tanner also recommends that people start by getting a taste of what teaching is like by becoming a substitute. Anyone who has had at least 60 hours of college course work and passes a background check can get a certification to teach as a substitute.

That’s what former sales and marketing professional Pat Stidham did as he began transitioning into teaching. Pat — Debra’s husband — was following his wife’s lead. 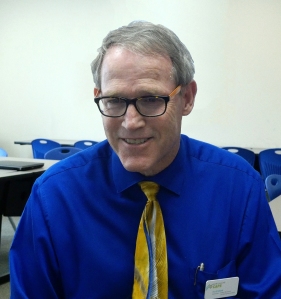 “We both had been in sales; we both had basically chased money,” he said. “I just saw how much happier she seemed to be not worrying about quotas and, instead, making a difference in her students’ lives. So we sat down and talked about what it would take for both of us to make the switch because, financially, it was a huge step. Once we agreed we could do it, I jumped into it.”

Even as veteran teachers — today, they’ve each spent more than a decade working in education — the Stidhams say they still benefit from the experience they gained during their professional careers.

“I don’t know how people teach without previous experience. That’s not a knock on teachers — some of the best people I’ve met are in this industry,” said Pat Stidham. “It’s just human nature to want to listen to people who have done things, not people who have read about it or studied it.”

However, the Stidhams know firsthand how challenging it can be to leave a stable career to become a teacher. They’d like to see fewer hurdles for experienced professionals who want to teach. A streamlined certification process that takes into account professional experience would help.

They also said teacher salaries should be increased to make them more comparable with other careers.

But despite the challenges they faced to become teachers, the Stidhams said the rewards they’ve received are immeasurable.

Recalling again her first year as a third-grade teacher, Debra Stidham mentioned a boy who joined her class about a month after school started. He spoke Spanish.

At the time, her school had no services for students who needed to learn English — and Debra Stidham had no training for this situation. However, she used her limited Spanish skills to help the boy begin to learn English and keep up with his schoolwork.

With her help, the boy began to thrive.

“It’s when you see that lightbulb go on,” Debra Stidham said.

That experience stuck with her and greatly influenced her path in education. Today, she oversees 13 teachers who help nearly 1,000 students learn English in the Independence School District.

She’s stayed in touch with that third-grader she met during her first year. Last fall, she attended his college commencement. He graduated with honors and is now working toward his doctorate.

“To me, that’s what it’s all about,” she said. “When you see it from beginning to end and you see a success.”

Want to become a second-career teacher? Start by calling the DESE certification main line: 573.751.0051 or visit the certification website.