Emerson invests in the Ferguson workforce

Posted on August 23, 2016 by Jacob Luecke Leave a comment

Twenty-six-year-old Jordan Graves dreams of someday owning his own mechanics shop in Ferguson, his hometown. He wants to follow in the footsteps of his father, who owned a mechanics shop in St. Louis until he died in 2005 when Jordan was 15.

“I want to pick up where he left off. I guess you could say working with my hands is in my blood,” Graves said. 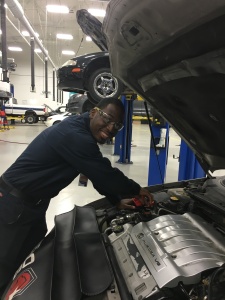 Graves reached an important milestone toward that dream on June 6 when he received an automotive maintenance technology degree from Ranken Technical College as one of the first graduates from the Ferguson Forward scholarship initiative.

Emerson, a St. Louis-based technology and engineering company, established Ferguson Forward with a $4.4 million investment in scholarships, youth employment efforts and training for residents of North St. Louis County and Ferguson. The effort was in response to the unrest that took place after the 2014 shooting of Michael Brown.

The unrest hit close to home for the company, as its global headquarters is located near the site of the shooting. A temporary police command center was set up across the street from Emerson during the weeks of protests that followed the shooting.

“Ferguson is our home and has been for the last 70 years,” Emerson Chairman and CEO David Farr said in a statement. “We choose to be here and are committed to this community, especially now in its increased time of need. We believe in hope and opportunity and want to help remove barriers so that more of our neighbors can succeed.”

“Much of the discussion about what happened in Ferguson is about jobs,” said Stan Shoun, president of Ranken. “The truth and reality is, it is not about jobs. On any given day there are 10,000 unfilled jobs in the St. Louis area. It is not jobs that are needed; it’s skills that are needed. And education is the predecessor to skills.”

According to Shoun, nearly 50 percent of Ranken students come from urban St. Louis. The college is located less than 10 miles from Ferguson.

In the first year of the program, Ranken awarded 140 scholarships, valued at $1.2 million. In 2016, Ranken was able to match that funding. With additional contributions to Ranken from St. Louis businesses Enterprise Rent-A-Car, Express Scripts, Carr Lane Manufacturing and Anheuser-Busch, Shoun hopes to continue providing support at that rate for the next five years.

“The idea was to give North County residents an education, a skill and a career where they live,” Shoun said.

If Graves is any indication, the strategy is working. Graves wants to pay forward the opportunity he has been given.

“I want my shop to be an anchor where I come from: Ferguson,” Graves said. “This scholarship gave me a second chance to be successful. So I want to give back to the people that gave to me and hire other Ranken students to work for me in my own shop.”

Providing integrated, hands-on work experience in actual automotive dealerships and manufacturing facilities is a critical part of Ranken’s education model. Graves received much of his training by working in a St. Louis-area Kia dealership.

“We believe the best way to train for work is work,” Shoun said.

Ranken students must clock in on time and meet the same dress standards as other employees.

“I wear my uniform with pride,” Graves said. “When people ask me about it, I tell them about the scholarship. I try to get more people involved.”

Ranken Technical College places 97 percent of its students within six months of graduation. Investments in initiatives like Ferguson Forward could go a long way toward reducing the unemployment rate in the Ferguson area, which was 12.7 percent in 2015, almost twice the national average, according to USA City Facts. The unemployment rate for African-Americans living in urban St. Louis was nearly 17 percent.

For companies like Emerson, smart investments in education make good business sense. But for Graves, the impact of the scholarship he received through Ferguson Forward is much more personal. It is a chance for him to be successful in his hometown.

For now, Graves plans on working for a dealership until he has enough money to open his own place. He may call it CCC Automotive, the name of his father’s shop. Honoring his father is important to Graves, but most of all, he wants his work to make an impression on his son.

“I want to pave the way for him and show him how to be successful and what success looks like,” Graves said. “I want him to see the importance of hard work and working for your community and family.”