In diverging from their parties, governor candidates create race defined by policy

The Missouri governor’s race offers a choice between elected experience and an outsider’s fresh perspective. It’s a referendum on right-to-work in Missouri. It’s a contest between continuing to push for Medicaid expansion and seeking another path.

It is — refreshingly — an election centered on contrasting positions that relate to important Missouri issues.

What it’s not is a race defined by strict ideology or party loyalty.

That’s because when Missouri voters go to the polls on Nov. 8, they will choose between two credible candidates who hold views that skew toward the middle of Missouri’s political spectrum. 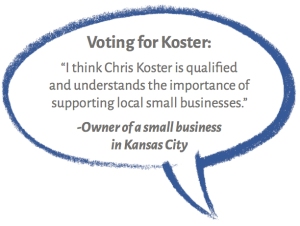 The Democrat, Chris Koster, boasts more than 20 years of service as an elected official. For the last eight years, he’s served as the state’s attorney general. His résumé also includes holding a caucus leadership role when he was a Republican in the Missouri Senate. Earlier, he was the Cass County prosecuting attorney.

“A good deal will be made this year over whether experience or a lack of experience is a better background to serve as governor of this state,” said Koster. “My personal opinion is that it is better to know the government you lead than to not know it. And the deeper one’s understanding of this great state, the better one is able to manage this $27 billion enterprise we call Missouri.”

The Republican, Eric Greitens, is a political newcomer. He gained national notoriety as a Navy SEAL, author and founder of a nonprofit called The Mission Continues. He has been named one of Time’s 100 Most Influential People. He was also included on Fortune’s list of the World’s 50 Greatest Leaders.

“Our government is broken. Our economy is lagging. Our kids aren’t getting a quality education. The failure of career politicians is hurting real people,” Greitens said. “We can’t trust the same people who got us into this mess to get us out. We need someone who has proven himself in the real world to take our state forward.” 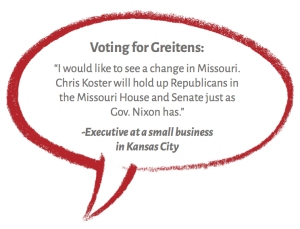 During their careers and this campaign, both Greitens and Koster have taken positions at odds with their parties.

When Republicans in the Missouri General Assembly tried to pass a religious liberty amendment to the state’s constitution earlier this year, Greitens was the only Republican governor candidate to speak out against the effort. He sided with many in the state’s business community, agreeing that the amendment would hurt the state’s economy.

“This debate doesn’t have to be a choice between protecting religious liberties or protecting Missouri jobs,” Greitens said in a statement at the time. “We can and we must do both, but it will take real leadership.”

Koster, too, has taken stances at odds with his party. As attorney general, he filed suits against President Barack Obama’s administration over EPA rules. He also filed a brief supporting a case against the individual mandate contained in the Democrat-backed Affordable Care Act.

“My office has been at the national forefront of fighting back regulatory overreach from Washington, D.C.,” said Koster. “In just the last two years, I sued the Obama administration over the EPA’s mercury rule and won. I then sued the EPA over the Waters of the United States rule and won. Then I sued the EPA over the Clean Power Plan in order to keep Missouri’s utility rates low and last week in the United States Supreme Court won again.”

But while the traditional party lines may appear blurred when these two candidates are compared, several clear differences exist.

“Right-to-work is a commonsense reform that will send a message to job creators all over the country: Missouri is open for business,” Greitens said. “No one should be forced to join a union as a condition of employment, and when I’m governor we will sign right-to-work and other free market reforms that will expand jobs and opportunity here in Missouri.”

“We can move forward together without right-to-work, without reducing the wages of certain Missourians in order to benefit some other Missourians,” he said in a campaign video.

“Set aside the health care benefits of Medicaid expansion. Set aside the humanitarian considerations,” Koster said. “If for no other reason than the economic benefits alone, leveraging 2 billion federal health care dollars annually is the best economic development proposal this state has seen in 25 years.” 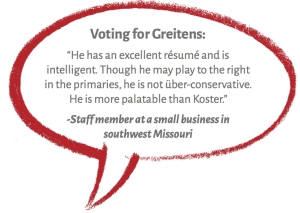 Greitens opposes the Affordable Care Act — a position that harmonizes with the state’s General Assembly, which would have to bless any expansion. However, he said he is open to a solution that uses block grants to reform the health care system.

“Missouri should not expand Obamacare. It’s a broken system full of empty promises,” Greitens said. “As governor, I’ll advocate for the federal government to block-grant all Medicaid funds to Missouri so that we can institute health care reforms that ensure affordable coverage and a quality business environment.”

The next governor will also play an important role in the discussion around reforming Missouri’s litigation climate — two national groups have rated Missouri’s legal climate among the worst in the nation for businesses.

During his campaign, Koster has cited his 2005 Senate votes in favor of an important legal reform bill — “a bill which I worked on and voted in favor of when I was in the Missouri Senate,” Koster said.

“We need to put an end to frivolous lawsuits against businesses and create an environment that allows them to grow — rather than continuing an uncertain business climate,” he said.