Missouri race could decide control of the U.S. Senate

Roy Blunt was in his mid-30s when he won his first statewide election to become Missouri secretary of state, a position that later helped catapult him to longstanding service in Washington, D.C.

Now Missouri’s current secretary of state, Jason Kander, is hoping to take that same path — and unseat Blunt in the process.

The race is expected to be close and the election here is drawing national attention, as Missouri’s seat could either give Democrats control of the Senate or help Republicans keep the majority they gained after the 2014 election. 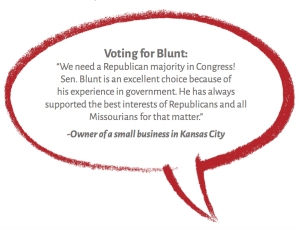 Incumbent Sen. Roy Blunt, a Republican, is campaigning for his second term in the Senate after he won an open seat in 2010 following Kit Bond’s retirement from office. He previously served as one of his party’s top leaders in the U.S. House of Representatives. Blunt’s earlier jobs include serving as Greene County clerk and working as a college president and a schoolteacher.

Democrat Jason Kander decided to challenge Blunt after serving one term as Missouri secretary of state. Kander was previously a lawmaker in the Missouri House of Representatives. He is also a veteran who served as an Army intelligence officer in Afghanistan, conducting anti-corruption investigations.

During their time as lawmakers, both Kander and Blunt have worked on legislation aimed at boosting the manufacturing industry. In 2010, Kander co-sponsored the Manufacturing Jobs Act in the Missouri House of Representatives. The act was signed into law later that year and led to Ford and General Motors expanding their manufacturing operations in Missouri.

In 2014, Blunt introduced and helped pass the Revitalize American Manufacturing and Innovation Act. The act is intended to spur innovation and help ensure the domestic manufacturing industry stays globally competitive.

“Supporting innovation and manufacturing in America will help us continue to compete in a global economy,” Blunt said in a news release upon the act’s passage. “I look forward to building on this success in the new Congress and working with my colleagues to pass policies that encourage more economic opportunity and jump-start good-paying jobs for workers in Missouri and nationwide.”

s secretary of state, Kander suggested that Missouri should reduce its business filing fees to the lowest in the nation, a proposal that has not yet become law. He also modernized the form-filing process, allowing businesses to electronically file nearly all government-required paperwork.

“If you are an entrepreneur who’s trying to be successful, I want you to spend the least possible amount of time worrying about compliance, fees and forms so you can focus your time on growing your business and growing jobs in your community,” Kander said in a 2014 interview with Missouri Business.

As in many other congressional races this year, the Trans-Pacific Partnership has become an issue during the Senate campaign in Missouri.

As the Trans-Pacific Partnership was being negotiated, Blunt spoke favorably about the potential deal and the importance of establishing long-term trading partnerships to help expand our country’s influence across the world. 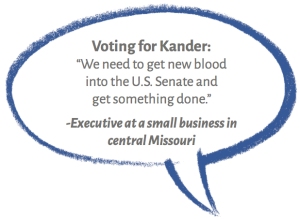 “The Trans-Pacific Partnership being negotiated right now would be a great example,” Blunt said during a 2015 speech at Westminster College. “That part of the world will be dramatically different 20 years from now if they follow the path that we pursue rather than if they follow the alternative, which is more likely to be pursued by the Chinese and the Russians.”

Kander has spoken out against giving the president the power to fast-track the trade deal with little congressional oversight.

“It’s something so big, it could be the biggest trade agreement since NAFTA, and yet the American public really hasn’t had an opportunity to examine it,” Kander said in a video on his campaign website. “So I don’t think Congress should just rubber-stamp a trade agenda when so much is at stake.”