Posted on November 6, 2017 by Jacob Luecke Leave a comment

The busiest stretch of road in Springfield carries nearly 70,000 vehicles each day.

But today — a Wednesday in mid-August — the only machine operating in the northbound lanes of Highway 65 is a 50-ton excavator.

The machine’s hydraulic arm lifts shattered pavement and metal mesh, hoisting them into a nearby dump truck.

After 45 years of use, the heavily traveled roadway here is worn out and broken. 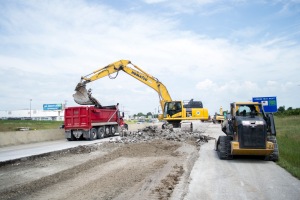 “It was built in 1972. That’s when they put it down,” said Don Saiko, project manager for the Missouri Department of Transportation. “There were areas where we were getting concrete that was popping out. There were potholes. So we thought, ‘Let’s go ahead and do something.’”

On this day, highway workers from Millstone Weber, the contractor for this nearly $8 million project, are thinly spread across the nearly milelong worksite.

At one end is the excavator and a unique machine called the Badger Breaker, which was brought in from Wisconsin. With a top speed of 5 miles per hour, the Badger Breaker creeps down the highway as its rows of hydraulic hammers, weighing up to 1 ton each, smash 10-inch-thick pavement into rubble.

At the other end is a concrete paver, a broad contraption that stands 12 feet over the roadway and is wide enough to pave two lanes of traffic at once. It’s idle at the moment; paving happens at night on this job.

Nearby, Millstone Weber workers prepare for that night’s paving by placing steel dowel bars every 15 feet, where the joints in the pavement will meet.

These are all standard sights on a modern highway rebuild job. But what’s unusual here is the lack of adjacent traffic. There are no orange cones dividing the job site from passing cars that have been merged into a single lane.

Instead, sections of road that are under construction are closed and cars are ushered completely off the highway and onto bypass routes. 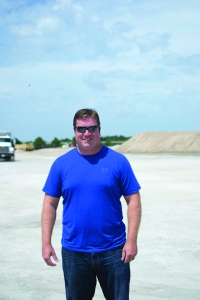 “There are multiple reasons to do this. It’s more efficient. Safer. We can work faster,” said Brandon Bates, project manager with Millstone Weber. “Just the safety aspect of it is a big one. The other night it was really foggy. If we were actually working next to traffic in the fog, that always makes me nervous.”

Because of the lack of traffic, Bates said, the work on Highway 65 more closely resembled an airport runway project than a typical road rebuild.

“That’s kind of how we looked at it,” he said. “Because on an airport runway you shut it down, you don’t have planes flying in.”

Closing the highway greatly sped up the work. If the state would have opted for using partial closures or working only at night, the project could have lasted up to two years. But as it stands, the contract between the state and Millstone Weber gave the company just over two months to complete the work. The company would actually finish the project 11 days early and collect a $500,000 bonus for getting the job done at least 10 days ahead of schedule.

“We’ve had a great partnership with Millstone Weber,” said Angela Eden, senior communications specialist with the Missouri Department of Transportation. “They have done exactly what they said they were going to do, and we were able to communicate that to drivers.”

But closing the highway came with risks.

Along with Interstate 44, Highway 65 is the economic artery of southwest Missouri. It carries local commuters to work in Springfield each day. It’s a crucial truck shipping route. It’s the main path into Branson tourist destinations. It’s heavily used by students at Missouri State University and other local colleges.

“Logistically speaking, its capacity to handle increased use is absolutely one of the most important fixtures in our ability to ensure businesses see this as a viable place to locate or expand,” said Matt Morrow, president of the Springfield Area Chamber of Commerce.

Early on, many local stakeholders were concerned about how they would be impacted by the closure, said Eden. The Missouri Department of Transportation hosted meetings around the district to get support for fixing the closing sections of the highway so that it could be fixed sooner.

“It was evident they evaluated input and shaped the project based on minimizing impact to travel while also being as time- and cost-efficient as possible,” said Morrow. “There was a concerted effort to communicate with the region during each construction phase regarding the schedule, impact to travel and alternate routes — that included a dedicated project website and social media campaign.”

In addition, the department developed an extensive communications campaign to keep local motorists and visitors informed about what to expect as different sections of the highway closed and reopened.

The closures ended on Aug. 27 when state transportation leaders sent an alert notifying area drivers that all lanes of Highway 65 were now open — with some nighttime lane and ramp closures still to come as the contractor finished up the project.

Despite the early concerns, the project went smoothly and the new lanes are ready for another 40-plus years of traffic.

“I think it went very well,” said Saiko. “People I talk to say they’re surprised how quick it went. That was our intent.”

“For having 70,000 cars a day on this route, the number of complaints we’ve had probably I could list on my one hand,” she said.

The project went so well that the state is now planning a similar effort to rebuild another busy section of Highway 65 in 2019.