A look back at 95 years of Missouri Chamber history

This year, the Missouri Chamber of Commerce and Industry is celebrating its 95th anniversary.

In honor of the Missouri Chamber’s anniversary, we are publishing some highlights from our organization’s many decades of work in our state. Keep reading to learn how we have evolved and remained very relevant over the years.

This organization was founded on April 6, 1923, when several prominent residents met in the hall of the House of Representatives at the Missouri State Capitol.

Originally, the Missouri Chamber was called The Missouri Association for A Greater Missouri. The organization was founded, among many reasons, for the purpose of “promoting loyalty to the state of Missouri and confidence in its resources to foster civic and state pride and to inspire patriotic ideals.”

The Missouri Association’s motto was “No Creed, No Class, No Politics.”

“First road machinery ever unloaded in Reynolds county to make roads under the Hawes road law.” 1930.

The dawning of the decade of the Great Depression found the Missouri State Chamber dealing with issues such as city planning, roadside beautification, highway and bridge construction, transportation planning, soil erosion, and the problem of government competition in business.

An article in the January/February 1931 issue of Missouri magazine listed the outstanding problems to be considered by the 56th General Assembly as “the rehabilitation of Missouri’s educational, eleemosynary and penal institutions, redistricting of senatorial and congressional districts, creation of a state highway patrol, and provision for a highway safety code.”

But there were other worthy areas of interest as well. For example, a December 1932 article encouraged community “thrift gardens” to “furnish fresh vegetables and healthy outdoor life to hundreds of city folk during this period of unemployment and depression.” A September 1933 article offered advice on how work-relief projects lifted the state’s needy from “relief rolls to pay rolls.” A 1935 piece offered “A Concise Digest of the New Social Security Law.”

Sawmill scene near present site of Steele. John R. Kelley, founder of the town, on horseback. 1930.

Information about the activities of the Missouri State Chamber during the 1940s is sparse because the magazine was not published during the “War Years.” Even the organization’s large annual meetings were disbanded “for the duration.” Nevertheless, we do know that the Missouri State Chamber assisted with the war effort and focused its activities mainly on transportation, agriculture, conservation and industrial development. 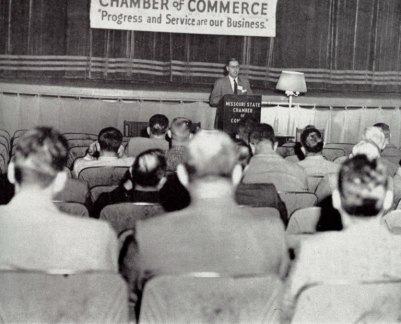 Thrift Gardens like this one helped nourish Missourians during the Great Depression. 1932.

The postwar era found the Missouri State Chamber resuming production of a monthly news publication, according to which two of the big issues of the 1950s were right-to-work legislation and labor problems.

These issues and others were taken to the public in the early 1950s by regular broadcasts on 26 radio stations. In 1953, the organization began co-sponsoring the Missouriana Studytour with Central Missouri State University to educate teachers about the free-enterprise system.

By 1955, the association had begun to focus more on influencing legislation in the General Assembly. We greatly expanded our legislative service to members and for the first time hired a full-time lobbyist. In 1958, field offices were established in St. Louis and Kansas City, and an actor named Ronald Reagan, host of TV’s “General Electric Theater,” “delivered a rapid-fire address on free enterprise” as the keynote speaker at the annual meeting.

As the decade drew to a close, the Missouri State Chamber pioneered its Political Action Program, which would be used as a model for other state chambers and organizations. The emphasis was now solidly on “a better business climate.”

The emphasis on legislation to support better business conditions continued to grow in importance as the Missouri State Chamber moved into the 1960s. It was at this point that the organization began publishing the voters’ guides and legislative handbooks that continue to be distributed today. Other areas of importance were industrial development, unemployment compensation and several national issues.

Then, in 1962, emphasis shifted somewhat to support for public schools, and the Freedom Forum program for high school students was established. In 1964, the State Chamber co-sponsored a trade mission to Europe with 50 members participating, economic development emerged as a priority, and our Education Foundation was chartered. 1965 saw Col. C.R. Stribling of Missouri Military Academy in Mexico elected chairman, and education programs took on even more importance along with legislative and citizenship programs. In 1967, agribusiness was of great interest, the communications program was expanded and college-business symposiums began. 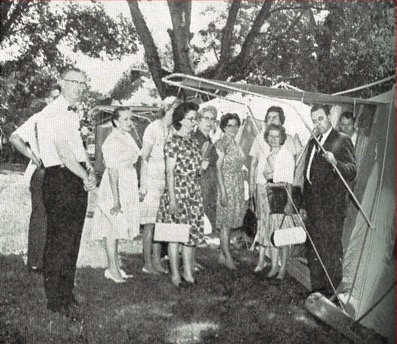 12th Annual Missouriana StudyTour. Tour members get a close look at finished products at the Research Center of the Hawthorn Company, New Haven. 1964.

The 1970s would bring a new name and a new home to the organization. On Nov. 14, 1973, the Missouri State Chamber of Commerce dropped the “State”fromitsname,officiallybecoming the Missouri Chamber of Commerce. In 1974, land was purchased to build the structure that today houses our offices. The groundbreaking ceremony was held on Aug. 22, 1975. In 1977, we moved into our new home at 428 E. Capitol Ave. in Jefferson City.

On the political front, the 1971 General Assembly passed legislation that raised the personal income tax rate from 1.5 percent to a maximum of 6 percent and the corporate tax to 5 percent. Twenty- five “major” labor bills were defeated, one of which would have prohibited the business of “strikebreaking.” Also stopped were anti-business measures concerned with unemployment compensation, agribusiness and the environment, and discriminatory business practices.

In 1972, an unemployment compensation compliance bill was passed along with a rate reduction. In addition, the General Assembly defeated several key labor bills, including one that would have established a state minimum wage starting at $1.80 an hour. The General Assembly also passed four environmental bills “without doing undue harm to industry.”

If all this sounds familiar, that’s because it is. These issues were revisited time and time again throughout the 1980s and 1990s and still are in the new millennium. That’s because the same anti-business forces that we have faced over the decades still exist. In fact, these forces are stronger than ever politically and financially.

Missouri Chamber’s headquarters in Jefferson City being readied for occupancy. 1976.

The Missouri Chamber’s political influence has grown, and pro-business majorities were achieved in both chambers of the General Assembly. In the last decade, the Missouri Chamber has been at the forefront of sweeping tort reform and workers’ compensation reforms. Innovative economic development tools were also passed and enhanced, allowing our state to position itself for job creation. We were also the lead advocate for eliminating the corporate franchise tax and securing the first corporate income tax cut in nearly 100 years. In addition, the Missouri Chamber joined in the efforts to make Missouri a right-to-work state.

Regardless of the issue, the Missouri Chamber has been able to defeat legislation that would be detrimental to business and has helped pass hundreds of important, positive measures. At the same time, we continue to bring our members new and improved products and services and improve our public education programs. Without the support of employers and local chambers of commerce, none of this would have been possible. It’s part and parcel of Missouri companies’ commitment to making our state a better place for people to live and work.

With the creation of the Missouri Chamber’s 15-year strategic plan, Missouri 2030: An Agenda to Lead, the Missouri Chamber continues to be the force securing positive change that will make our state the best place in the world to do business and grow jobs. We’re extremely proud of the many things the Missouri Chamber has done to improve the business community, and we have no doubt that we will continue to do so for another 95 years and beyond.