Alexa has many talents. The digital assistant created by Amazon can answer questions, play music, send text messages and even order pizza.

But those suggestions sound mundane compared to what Alexa has in mind for today.

“Are you interested in seeing a big chemical reaction?” she asks.

Her nonchalant way of posing the question might elicit a double take — but still, it’s impossible to resist finding out what’s coming next. 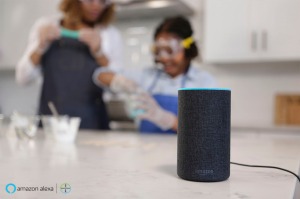 The company, which now has a huge presence in Missouri after its acquisition of Monsanto, is using Alexa as a fun, modern way to introduce young people to the joys of science.

Today, anyone who has access to an Alexa device can engage in Bayer-created, kid-friendly science projects by simply uttering this phrase: “Alexa, enable Science Studio.”

Science Studio currently has five experiments. Once it’s installed, Alexa will talk children and their parents through simple instructions for creating a small rocket, making slime and other fun activities.

The projects take only about 10 minutes.

Another feature of Science Studio gives Alexa the power to help students with homework questions on topics such as photosynthesis and the states of matter.

“We’ve been engaged in hands-on science education for almost 2½ decades now,” said Ray Kerins, Bayer’s senior vice president and head of communications, government relations and policy. “We know that children lose interest in science and STEM when they’re in middle school — especially young girls and minorities. What we’re doing is trying to help solve a problem.”

It’s a problem that deeply affects the future of Bayer, which focuses on pharmaceutical and life sciences research in the areas of agriculture and health care.

Bayer has long recognized that the scientific community needs much more talent than schools are currently graduating.

“We’re talking engineers, mathematicians, scientists, chemists, biologists — we don’t have enough people to fill these roles,” Kerins said. “In the traditional Bayer fashion, we don’t complain about it. We’re actually trying to do something about it.”

For many years, the core of the company’s push into education has been a program called Making Science Make Sense. This program gives Bayer staff members paid time off to go into local schools and conduct science experiments with students — often to an enthusiastic response.

“You walk into a classroom and you tell kids, ‘Listen, we want you guys to build a rocket with us.’ This is hands-on science. Everyone’s excited,” Kerins said. “The key to it is that while they’re excited, you’re explaining to them the chemical reaction, and they’re paying attention to you because they want this thing to pop into the air.”

In 2015, Bayer decided to boost its education efforts by challenging its employees to reach 1 million students by 2020. The company has already met that goal.

Now Bayer is upping its target fivefold, attempting to provide science experiences to 5 million students by 2025.

Science Studio is part of the company’s plan to reach that many young people. With the launch of Science Studio this past December, Bayer now has the potential to share its science programming through the more than 100 million Alexa devices that are already being used in homes and schools.

As it looks to promote Science Studio, the company has found an important ally in Jackie Joyner-Kersee. The former Olympic champion has joined Bayer at events to help introduce Science Studio to students.

As more students learn about Science Studio and begin creating chemical reactions with Alexa, Kerins said, Bayer is optimistic that this new technology will lead to a larger scientific workforce for tomorrow.

“We’re not done yet. We’re going to continue to look at ways to engage our youth, the next generation of leaders and scientists in this country,” Kerins said. “This is just the next step on a really wonderful journey. Wherever that takes us, the science will lead us there.”