Posted on February 20, 2019 by Jacob Luecke Leave a comment

Even with Missouri releasing an average of 19,000 inmates each year, the state’s prison population grew at an alarming rate between 2012 and 2017.

A primary cause of the overcrowding was people found guilty of repeat nonviolent offenses or supervision violations, according to the Council of State Governments.

But Shelle Jacobs, re-entry coordinator for the Missouri Department of Corrections, said there are proven ways to break the cycle — and that open-minded employers play a critical role. 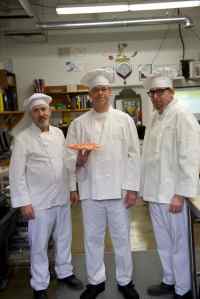 Inmates show off the baked goods they made in Culinary Arts class. This class teaches cooking, baking and industrial food safety so participants are prepared for jobs in restaurants or the food service industry.

“For overall incarceration rate, Missouri was eighth in the country in 2017. That’s not a place that we want to be,” Jacobs said. “So we need to do something for these men and women to prepare them for the workforce when they get out.”

Giving ex-offenders a second chance through a quality job isn’t just a benevolent thing to do — it also makes good business sense. With the Missouri unemployment rate at an all-time low (3 percent at the time of this writing), several companies facing critical worker shortages are turning to the ex-offender population to help fill jobs.

Springfield-based Multi-Craft Contractors offers industrial HVAC, electrical and plumbing system installation, among other services. Though the company won’t hire individuals with violent or sexual criminal histories, Herren said, it no longer screens against other ex-offenders who have less than a year of experience elsewhere.

“[The company] has gotten over that paradigm of, ‘You need to prove yourself somewhere else,’” said Herren. “We sold them on it, saying, ‘Look, if they’re in our plant, if they’re in an area where we can watch and have supervisors and mentors and maybe assign them a life coach, it could work.’”

One such program began in 2015 when Jacobs piloted an idea that Missouri corrections officials had never tried before: offering a standardized employment readiness test to a group of 18 inmates who would soon be released from the Algoa Correctional Center in Jefferson City. The test was ACT’s WorkKeys assessment, which is used by thousands of companies around the world and measures skills like applied math, graphic literacy, locating information and critical thinking.

“People were telling us: ‘These guys have been locked up. They are going to fail these tests; you are wasting state money,’” Jacobs recalled.

“That just tells you that these people have potential,” said Jacobs. “They’re smart. They’re skilled. They just need that second chance.”

The assessment program has since expanded to several other correctional centers and was highlighted as a best practice in the Missouri Chamber Foundation’s Workforce2030 Report. The study recommended expanding the program statewide.

Having a WorkKeys credential helps put an ex-offender on a path to success and assures employers that the skills the candidate brings to a role outweigh perceived risks. When paired with the training and professional development opportunities available during incarceration, inmates can upskill and gain industry certifications that help them land good jobs when they return to the workforce.

One of those programs is a 10-day Connections to Success (CTS) class that provides participants with career assessments, résumé building, goal planning assistance and mock interviews.

“[CTS] was one of the best classes I’ve taken since I’ve been here,” said one class graduate. “There was a lot we did in the class that helped build confidence…I never really realized all that I’d done until someone made a resume for me. I’m reading my resume and my jaw dropped like: ‘Wow. Wow. This is me?’ I’m not just my [inmate number]. I’m a certified mechanic, and I’ve been a foreman for a tree company for so long, and a union carpenter. There’s so much more to us.”

“I participated in the last CTS mock interviews and it was amazing. They were so prepared — good eye contact, firm handshake. They just stood a little taller and it was really impressive,” she said. “I would have hired every one of them that sat down in front of me.”

In a nearby Algoa building, other inmates don welding helmets and practice metalwork techniques on simulators.

“Simulators are a lot different than going out and welding, but it’s very helpful,” one inmate said.

“It helps us with position and distance and things like that,” another agreed.

When they’ve mastered the simulators, they can apply their skills to real welding projects and obtain welding certifications.

“I get calls from employers all the time who are looking for people with welding skills,” said Jacobs. 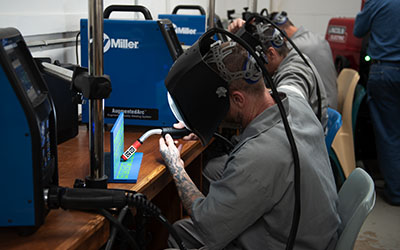 Next door to welding, inmates in a class offered in partnership with State Technical College of Missouri are doing hands-on work with electrical and HVAC equipment. The certifications they earn here will get them in the door at many HVAC and industrial refrigeration companies.

“I work at the [DOC’s] heating and cooling company here, and every day I use something I’ve learned in this class. It’s been really helpful,” said one participant.

As well as offering training at Algoa, State Tech’s mobile unit travels to correctional centers in Boonville and Vandalia. In the final training levels, trainees can enroll in the college and receive college credit.

“I already got certified in my EPA 608 and my HVAC, and I’m getting ready to take an online course here soon,” another participant said. “I go home in two weeks, so I’m going to be able to drive down to [State Tech] and continue to take classes.”

Besides tapping into this often underutilized source of workers, one benefit to employers for hiring ex-offenders is eligibility to receive the federal Work Opportunity Tax Credit — an incentive that in Missouri can be as high as $2,400 per ex-offender employee. Another benefit is the U.S. Department of Labor’s Federal Bonding Program, which protects businesses against any losses caused by dishonest or fraudulent acts of bonded employees during their first six months of employment.

“We’re trying to educate employers on all of those as well because that can really pay off,” Jacobs said.

Though misconceptions about ex-offenders aren’t always a simple thing to overcome, WorkKeys and training programs are proving to be valuable tools for the state’s reentry efforts.

“We can invest in them on the front end. I’ll show you skill-ups while they’re incarcerated,” Jacobs said. “Get them jobs when they get out so they don’t go back to prison, and we save ourselves a lot of money and we make our community safer.”